What is Proof of Work (PoW)?

Proof of Work was initially presented to safeguard network connections and systems from denial of service (DoS) attacks. Hashcash – the technology that is still used to protect the mining process on Bitcoin and was designed by Adam Back, one of Bitcoin’s co-developers – was one of its initial implementations.

Proof of Work is the job of the miner in Bitcoin. When a new block with transactions is added to the network, validators begin competing to solve a mathematical challenge (producing Proof of Work) that is associated with it. The winner, a miner who discovers the cryptographic nonce first, gets to write to the blockchain’s history and is subsequently paid by the network with a set quantity of crypto coins.

Essentially, PoW is a piece of data that is both difficult to produce computationally and simple to verify on the receiving end.

What are the disadvantages of PoW?

The process of resolving computing difficulties is intensely competitive, with those who have the most powerful mining hardware holding an advantage over those who do not. This contradicts the concept of decentralisation, which is key to blockchain technology.

The immense effort and resources used in securing blockchains are in no way beneficial to society. And once a computing challenge is solved, miners move on to the next one, tossing their prior efforts to the ground.

Server farms with sophisticated mining equipment that consume large amounts of electricity to perform virtually nothing are environmentally damaging.

While a mining pool with centralised network control can still play fairly, nothing prevents it from attacking a blockchain, invalidating legitimate transactions, and spending crypto currency twice.

To combat these disadvantages, the designers of Ethereum, the world’s second largest blockchain, intend to transition from Proof of Work to Proof of Stake (PoS). 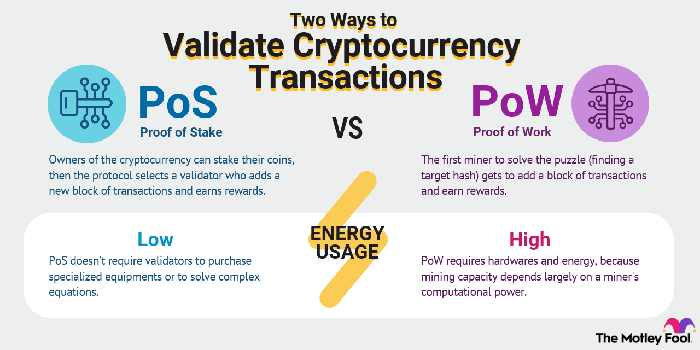 What is Proof of Stake (PoS)?

Proof of Stake eliminates the need for manpower in the mining process. This method allows miners with the most coins (internal resources) to write to the history of a blockchain. The core idea of PoS is that the more involved a validator is in the network (the larger their stake), the less likely they are to attack it, and thus the more validating powers they should be granted.

The only cryptographic calculations involved in PoS are those used to determine if a miner has the required quantity of cryptocurrency. According to Ethereum’s developers, a person who owns 5% of all ether will be able to mine 5% of all transactions that occur.

It will also allow more people to participate in the validating process because there would be no need to purchase expensive mining hardware.

What are the benefits of PoS?

As there will be no mining in its old form, the issue of excessive energy waste will be eliminated.

There will be no market for better mining hardware if there is no competition in solving computational riddles. As a result, more people will be motivated to take part in the validation process.

Despite significantly lowering energy costs, PoS will make blockchain assaults much more expensive. If anyone decides to buy up 51 percent of ether in order to try to alter transaction blocks, they’ll have to pay millions of dollars to get the coins (due to limited supply and increased demand, the ether price will rise dramatically) and then risk losing their money by destabilising the very blockchain they’ve invested in

The demand for graphics cards for cryptographic mining should decrease. This could ultimately break the shortage and lead to a reduced price. That’s fantastic news for gamers.

Aside from the assumption that a miner will not spend their money to attack the blockchain, PoS provides a scenario for how harmful behaviours might be mitigated if they occur. If a chain takeover occurs, the Ethereum community can simply hard fork the network and delete the attacking miners’ deposits, regardless of how many coins, i.e., mining power, they may have.

All in all, no one, but the criminals, will suffer losses in the long term. The honest validators, on the other hand, will end up richer as the ether supply bottleneck produced by the fork will drive up the price of the currencies even further.